Yes, yes, I know this is a bit overdue and you all probably know that Dawson is back in some sort of form in that new American comedy show Don't Trust the B---- in Apartment 23 or Apartment 23 (which is easier and quicker to say). Well I don't really care because I'm going to tell you all over again: DAWSON LEERY IS BACK!


For all the hardcore Dawson's Creek fans out there, this is probably a long time coming and must feel like some sort of cool but crazy dream that they never thought would happen but somehow did after all those tedious years that the Creek has been off air. Not me, I'm lucky. I AM a hardcore Creek fan (probably. don't quote me on that), but only since about a year ago when I stumbled upon some old repeats of The Creek on British TV. I now own all the dvd box sets (yes, even season 5) and have a Team Pacey poster up on my bedroom wall (the last part isn't true, but it would be cool if it was).

You see, I was only about ten when Dawson's Creek was first aired back in the late 90s, and since I didn't have a cool older sibling to introduce me to it, I missed out. Last year all I could remember was that Tom Cruise's wife was it and some guy called Dawson whose creek it was. And then I realised what I'd been missing. Not only is The Creek a lovely bit of 90s nostalgia, it's also actually very, very good. I would urge any Gossip Girl or OC fan who hasn't to watch this next.


You see, for those of you who don't already know, Don't Trust the B----  in Apartment 23 is about a girl who finds herself sharing an apartment (apartment 23) which another girl who is a bit of a b----. This other girl (the b----), seeing as it's New York where dreams are made of happens to be best friends with the actor James Van Der Beek. She describes, 'he's like my gay bff, but he's straight' after being asked, 'Is that a picture of Dawson?' about a framed photo of him in her living room. Priceless.

In the show, the fictional James Van Der Beek is a washed up actor plagued with the dilemma that the film industry and everyone else only really think of him as Dawson. Therefore he is left with no choice but to star in bad straight to TV movies, endorse foreign products and if the mood takes him, sleep with twenty-something former Creek groupies by slinging the signature Dawson red flannel shirt over his shoulder and turning on the Dawson charm. So basically, fictional James Van Der Beek is pretty much the same as real life James Van Der Beek (minus the sleeping with Creek groupies thing of course, James is a married man). So, this means we get to see some top notch clips of fake bad films such as the father/daughter body swap comedy ('I don't like having to kiss Mommy!') and ads such as the 'Beek Jeans' parody.


Surely this all just goes to show how great James Van Der Beek is (although not enough for me to switch sides from Team Pacey). I really don't want to complain about or mock him in any way, but you see, even he admits in a roundabout way that he can't get taken seriously as an actor because everyone still sees him as Dawson. Which is why he's doing the best with what he's got by taking the mick out of himself. Which I think is awesome.

Since Dawson's Creek finished in the early 00s, aside from a standout role playing Patrick Bateman's little brother in Rules of Attraction, James hasn't had much luck hitting the big time and has had to settle for films with titles like 'Mrs Miracle' (yes, seriously). Plus there was that Internet meme showing Dawson crying that appeared EVERYWHERE on the Internet which didn't help matters.

Which is why it's great that James is playing up to all this. (Check out: http://www.jamesvandermemes.com/). It ALMOST makes me forget that I prefer Pacey to Dawson. 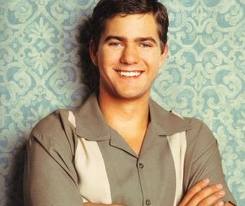 OK, no it doesn't. Only a fool wouldn't be Team Pacey. I mean, LOOK at him.

So if you want to give it a watch Don't Trust the B---- at Apartment 23 is currently (I think) showing on American channel ABC and in Britain on E4.

A brief guide to Dawson's Creek for those who never watched it, but should. 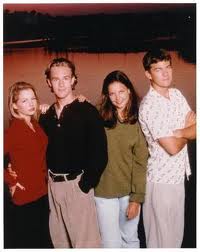 1. The series centres around sensitive dreamer Dawson (James Van Der Beek) who lives with his middle class family in a cute town by a creek.

3. Whilst the Creek might seem boring, lots of stuff actually goes on. In just a few short years these teenagers had to deal with fathers going to prison, restaurants being burnt down, teenagers having relationships with teachers, girls falling into the creek and dying and much, much more.

4. One of the main themes (and best things) of the whole series is the love triangle with Joey who must choose between the two best friends Dawson and Pacey. Que Dawson crying.

Posted by Definitely Maybe at 08:02 No comments: