Back in the mid 90s it seemed the American public were drinking too much coffee, soft drinks and other stuff and not enough milk. Well not as much milk as the dairy farmers of America would have liked and sales were really falling. So The National Milk Processor Board decided to hire some advertising people to launch an ad campaign.

You can just imagine a bunch of ad executives sitting around brainstorming, 'how do we get the general public to drink more milk?' 'celebrities. Lots of them.' 'they'll have to do something to do with milk though... let's have them wearing milk moustaches and we'll put cheesy captions about the power of milk.'

So an advertising campaign entitled 'Got Milk' ran, featuring posters of celebrities and even fictional characters from television and film and appeared in magazines across the USA. Actually, it's still going strong today so not just a 90s thing.

Being from the UK I don't remember this at all as we never get to see them over here!

Here's some of the best from the 90s-

Text reads- 'The calcium in low fat or fat free milk helps to prevent osteoporosis and keep my bones strong. So I can keep my mojo working overtime. Oh, behave.'


(1999) Aww, this is when Britney looked all sweet and innocent. Long time ago. 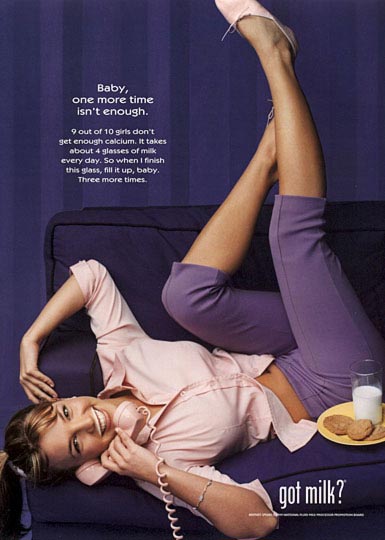 Text reads- '9 out of 10 girls don't get enough calcium. It takes about 4 glasses of milk every day. So when I finish this glass, fill it up, baby. Three more times.'

(1996) It's Jack from Lost! Only years ago when he was on this programme called Party of Five. 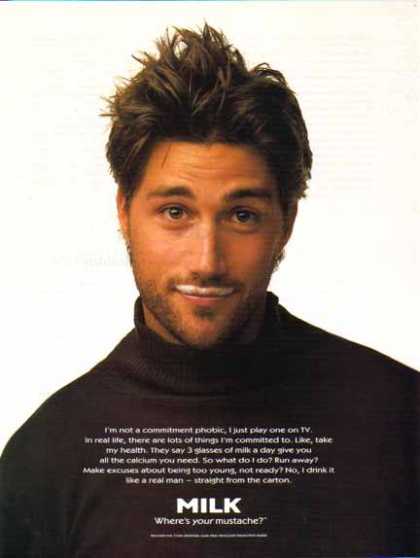 Text reads- 'I'm not a commitment phobic, I just play one of TV. In real life, there are lots of things I'm committed too. Like, take my health. They say 3 glasses of milk a day give you all the calcium you need. So what do I do? Run away? Makes excuses about being too young, not ready? No, I drink it like a real man- straight from the carton.' 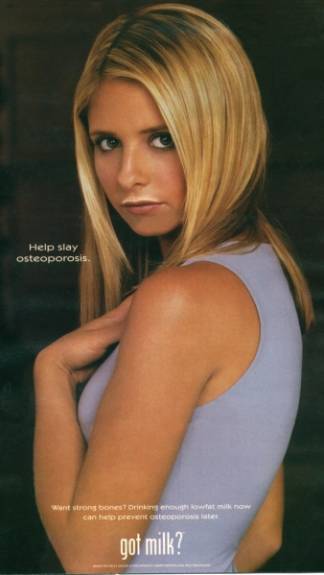 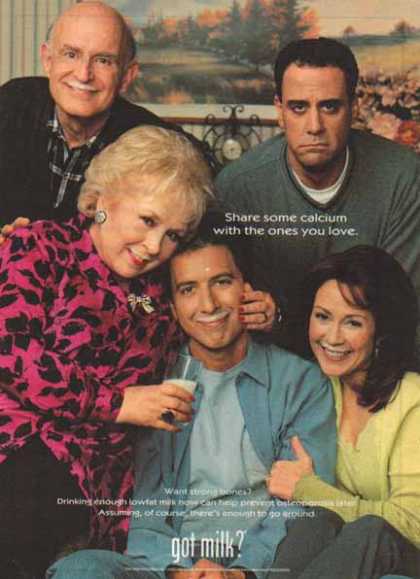 
(1995) Phoebe and Rachel from Friends. One question- where's Monica? 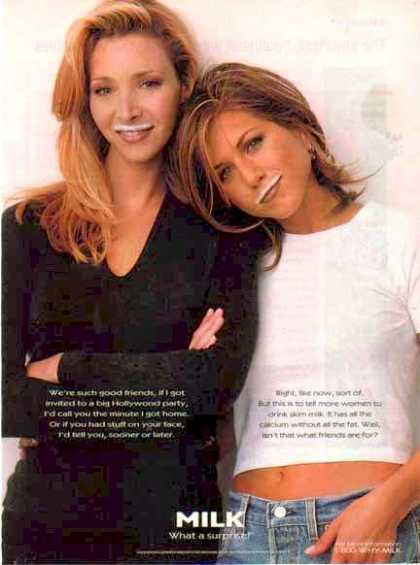 Text reads- 'We're such good friends, if I got invited to a big Hollywood party, I'd call you the minute I got home. Or if you had stuff on your face, I'd tell you, sooner or later.
Right, like now, sort of. But this is to tell more women to drink milk, it has all the calcium without all the fat. Wait, isn't that what friends are for?' 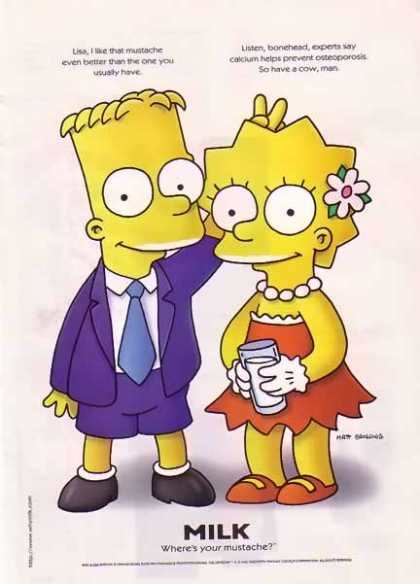 Text reads- 'Lisa, I like that moustache even better than the one you usually have'.... 'Listen, bonehead, experts say calcium helps prevent osteoporosis. So have a cow, man.' 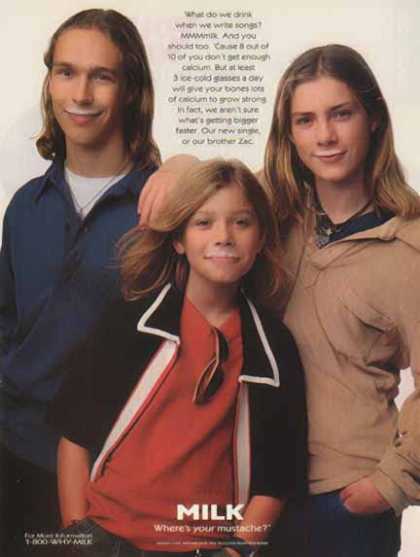 Text reads- ;What do we drink when we write songs? MMMmilk. And you should too. 'Cause 8 out of 10 of you don't get enough calcium/ But at least 3 ice-cold glasses a day will give your bones lots of calcium to grow strong. In fact, we aren't sure what's getting bigger faster. Our new single, or our brother Zac.'

(1998) The Backstreet Boys. Was this ever cool? Seriously? (Also, it looks like they're actually standing in a back street which is probably coincidental, but funny.) 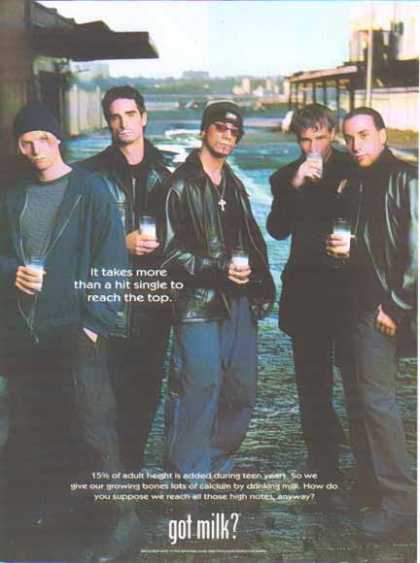 Text reads- '15% of adult height is added during teen years. So we give our growing bones lots of calcium by drinking milk. How do you suppose we reach all those high notes, anyway?' 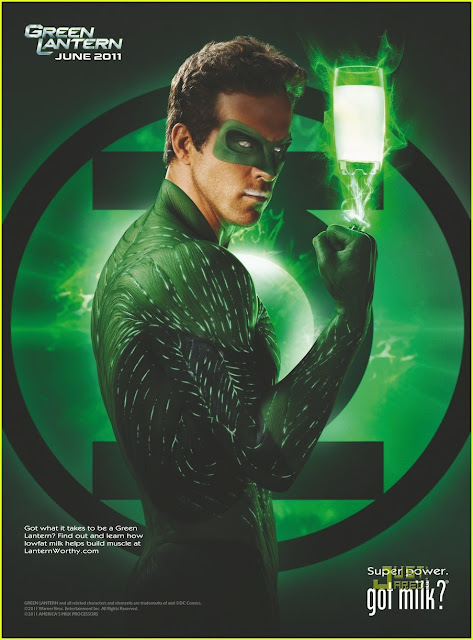 Text reads- 'Got what it takes to be a Green Lantern? Find out and learn how low fat milk helps build muscle at ____'

I've just discovered the UK started doing similar ads for their 'Make Mine Milk' campaign a couple of years ago. (!!!) Seeing that milk is actually healthy this is one of those celebrity endorsements that is probably a good thing. So I say, keep going for both campaigns. We want to see more!
Posted by Definitely Maybe at 16:12

Email ThisBlogThis!Share to TwitterShare to FacebookShare to Pinterest
Labels: 90s advertisements, Got Milk?, if you remember this you're probably quite old, nineties